Featured recipe's you can make, straight from the kitchen of Kitchen Marcela! 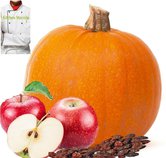 Did you know that pumpkin plants are native to Central America and Mexico but are now grown on six continents? Yep, that’s true! Here in the US, pumpkins have become the perfect food for the fall holidays of Halloween and Thanksgiving.  But you can eat them anytime throughout the year!    Harvested in October, this extra large fruit is rich in nutrients and vitamins… and seeds… lots of seeds. Pumpkins are low in calories, fat and sodium and high in fiber. They are good sources of Vitamin A, Vitamin B, potassium, protein, and iron. You can use pumpkin to make soups, breads and desserts including this Kitchen Marcela style pumpkin pie! And don’t throw out those seeds! They can be saved to grow new pumpkins for next year.

In a large saucepan combine the gelatin, cornstarch, pumpkin pie spice, cinnamon, ginger and salt. Stir in pumpkin and evaporated milk then let stand for 5 minutes to soften gelatin. Cook and stir over medium heat until the mixture bubbles: cook and stir for another 2 minutes. Remove from heat then gradually stir 1 cup of the hot mixture into eggs; return all egg mixture to the saucepan. Cook and stir over low heat for another 2 minutes but do not boil it. Remove from heat and stir in the nutmeg, sugar and raisins. In the bottom of the pie crust spread the apple filling evenly then top with the pumpkin raisin caramel mix. Place into the fridge to chill.

Now, you’re ready to present your dessert. You can serve it from warm to room temperature to next day – whichever is best for you.  Enjoy! 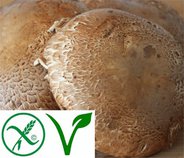 So what makes the Portabella (or Portobello) so popular? Marketing – pure and simple. As a mushroom “matures” and is cultivated, it’s developed into varieties. The portabella is a large derivative of one of these varieties with the food “experts” generally agreeing it’s an American invention with Italian roots made popular by clever marketing in the late 1980s/early 1990s. The marketers discovered people liked the larger brownish version and began to market it as a gourmet item. As for the name, all kinds of theories abound! Our favorite is portabella is the female variety while portobello is the male. We at Kitchen Marcela just know it as good!  And if you’re a vegetarian who is constantly on the lookout for new and exciting recipes to add to your diet, or maybe have a craving for something scrumptious and not heavy, then our take on the Grilled Stuffed Portabella is just for you!

But for any good recipe, you need good ingredients. The Kalamata olive for example, comes from the Kalamata (Kalamai) region of Greece, well known to produce one of the very finest olive varieties around! Just like all our recipes, we highly recommend fresh as much as possible.

So enough with the lesson, let’s get to the good part!

1/2 teaspoon finely chopped fresh *basil (could be rosemary or dill or all three!)

- Discard mushroom stems and remove brown gills from the undersides of the caps using a spoon then discard gills.

- Mix the remaining 1 teaspoon of oil, vinaigrette and soy sauce in a small bowl and brush the mixture over both sides of the mushroom caps.

- Oil the grill rack and place the mushroom on the rack, stem sides down.

- Cover and grill until soft (about 4-5 minutes per side).

- Remove from the grill and fill with the tomato mixture.

- Return to the grill, cover, and cook until the cheese is melted, about 3 more minutes.

Put it on your plates and enjoy any way you like it… that’s delicious! 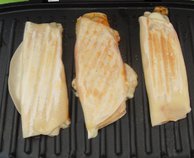 So what is a pizzadilla? A pizzadilla is essentially a quesadilla (a flour or a corn tortilla filled with cheese and other ingredients, folded taco style or in half to form a half-moon shape) but with minor changes to the ingredients and the shape.  The most important of which is tomato sauce and the triangle shape – just like a pizza! The first pizzadilla trademark seems to have come from - of all places, Subway Sandwiches (could you have guessed?) back in 1984.  The best thing about a cheese pizzadilla is it will get any kid's mouth watering, it’s easy to make and it's cooked on a grill so no frying involved.

Spread the sauce on the tortilla, evenly spread the cheese, fold in half or roll (my favorite because it’s easier and less messy!) and close the cover! Oh yes, don’t forget to plug-in the grill!

Once the pizzadilla is lightly browned and the cheese is melted, you just grab it and eat.  Easy-peasy.    Ahhh… that’s delicious!

*Don't have a contact grill? A pan and a spatula (to squish it) will work too!

Ceviche (seviche, cebiche, sebiche) is a seafood dish popular throughout the Caribbean, Mexico, Central and South America. The dish is typically made from fresh raw seafood cured in citrus juices such as lemon or lime and spiced with a range of ingredients, depending on the region and even the locality. These seasonings usually include onions, salt, pepper, garlic and several others. Ceviche is usually accompanied by side dishes that complement its flavors such as popcorn, sweet potato, lettuce, corn, avocado or several variations of plantain including sweet, chips or fried (aka: patacón, tostones, fritos verdes).  As the dish isn’t “cooked” with any heat, it must be prepared fresh to minimize the risk of food poisoning.

Although many types of seafood are used in ceviche, this recipe is made with arguably the most popular which is shrimp.  It’s also based on the typical style of Ecuador – with a little bit of Kitchen Marcela!

First thing to do is “cook” the shrimp.  Place the water, beer, garlic cloves and salt in the pot to full boil. While that is in process, peel the shrimp and add to the pot (once it’s boiling) until the mix has taken a pinkish hue (about 3 minutes). Immediately remove and set aside the shrimp from the pot and allow it and the liquid to separately cool at room temperature.  Once cool, place all the ingredients into the serving bowl, slowly mixing as you do and refrigerate for a minimum of four hours.

Ready to eat?  Well then take the bowl out of the fridge, slowly stir, let it sit at room temperature for about 15 minutes, make a bag of fresh popcorn, break out your best beer and serve.  Ahhh… that’s delicious!

Let us help you plan your corporate event or unique celebration
Planning an event but worried about the cost? No problem! We got you covered! With our KM Menu Options, you select the right menu to fit your needs - and still be happy! No pre-packaged, per head menus here! Everything we do is made-to-order. That's what makes Creations by Kitchen Marcela a truly unique event made just for you. Check out these ideas and see what we can do with your budget!
KM Menu Options with pricing.pdf
Adobe Acrobat document [264.8 KB]

We look forward to hearing from you about your special event. 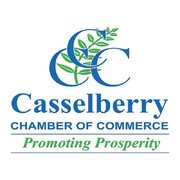